Culture and doctrine… two things that often get intermingled, especially in the LDS religion.  Our doctrine alone makes us peculiar. Add in our obsession with cream of chicken soup recipes, Disney movies, and voting for Republicans, and we can seem downright nutty.  But just because all of us have our kids in piano lessons doesn’t mean that playing the piano is part of our doctrine.  It’s just our culture.  And unlike doctrine, culture is totally optional.

Culture plays an important part in societies all around the globe, and it should.  Culture gives us meaning and a sense of belonging.  Along with our doctrine, culture shapes our day to day lives and adds to our personal identities.  It’s important to us, even though it isn’t essential to our beliefs.  It doesn’t make us better Mormons, but somehow makes us more Mormon-y!

The birthing world has a culture too.  And just like in Mormonism, birthing culture is often confused with birthing doctrine, and many birthing women and childbirth care providers are making cultural decisions instead of decisions that are based in truth.  After 12 years of working as a doula and childbirth educator, it is clear that the majority of the women I spoke with viewed birth culture as birth doctrine.

Our birth culture tells us that women can’t give birth without pain medication, that one-third of them can’t give birth vaginally, and that breastfeeding is rarely successful.  However, science (our birth doctrine) tells us that at least 90% of women can give birth vaginally, and that childbirth creates a physiological response in women to help them cope with the discomforts of giving birth.  Studies actually show that the field of obstetrics is the medical paradigm that is least based in scientific fact, and in fact, runs more on culture and preference than it does on “doctrine”.

Unlike Mormon culture, our birthing culture unfortunately increases risk and poorly affects outcomes.  America’s birth culture has actually increased our morbidity and mortality rates- a fact that almost everyone is unaware of.  To improve birth for American women, we must be willing to revise our culture and return to our doctrine. 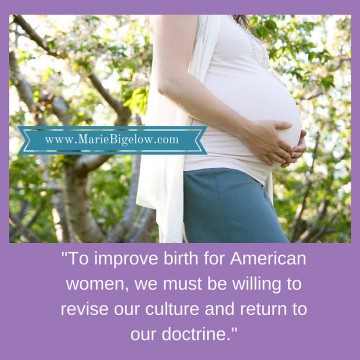 We love and live our religion because of the doctrine, not because of the culture.  Others look at our doctrine and wonder how we can be happy with so many restrictions; but we look at our doctrine and see its wisdom, and understand that keeping so many “rules” actually keeps us safe and happy.  The same could be true for birthing doctrine.  Once understood and practiced, birthing doctrine could improve outcomes for women and babies in every state and demographic.

Cultural decisions should be made after thorough study into the doctrine, whether you’re in Sunday school or in the delivery room.  After reading my book, you will understand the scientific doctrine of childbirth, and know which aspects of birth culture you agree with and which aspects you choose to avoid.

Participating in culture is a personal decision that represents choice, not worthiness.  But it’s important for everyone to understand that just like Mormon culture, birthing culture is optional as well.  We are not only allowed to practice our own culture, but capable of choosing the culture that best fits in with our beliefs system.  Beliefs that can only be formed by learning the doctrine.

2 thoughts on “Culture vs. Doctrine, in Mormonism and Childbirth.”